Difference Between Sanitization For Bacteria & Viruses

Published by SEO on November 15, 2021 in category: Uncategorized 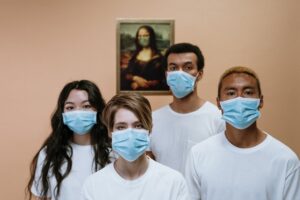 You may be wondering how differently you should sanitize your home or workplace when they have been prone to bacterial and viral infections. Bacteria and viruses are very different. Thus the sanitization for bacterial and viral infections are also largely different. When you’re sick with something, there are likely only two main ways you’ve gotten that ill. Once you’ve either contracted a viral infection or a bacterial one. As someone who’s taking care of someone with an infection, you may want to disinfect all the surfaces and countertops. However, the area of sanitization and the methods may differ depending on the type of reaction you have incurred.

Below, we’ll talk a little about both bacteria and viruses. How they infect human beings and the different methods of sanitization we take on for both infections.

Bacteria are ubiquitous, mostly free-living organism which consists of one biological cell. They are unicellular and exist in colonies. They can also occur in many shapes. Bacteria occur spherically, in rod-like structures, comma-shaped, and even in spiral shapes. The names of these bacteria are as follows, coccus form, bacillus form, vibrio form, and spirilla form.

The bacteria are single-celled microbes. They can move from place to place because of the flagella that they have. Even though they’re single cells, they pack a lot in that one cell. Bacterial cells are very close in shape to plant cells. They have a cell wall, nucleoid or genetic material, and plasmids. Bacteria are not all harmful. Some bacteria can also be helpful, as the bacteria in our stomach. Thus, you’re not trying to get rid of all the bacteria when sanitizing. You’re trying to get rid of harmful bacteria.

Different from bacteria, viruses aren’t active outside the body of the host. Viruses are called intermediates for this very reason.  Viruses aren’t as complex as bacteria. Viruses only have a protein coat and genetic material called DNA or RNA. This fact means they’re only active outside the host. Once they’re inside the host, viruses mutate rapidly, which causes problems within the host cell. This process is how a viral infection comes on.

If you compare bacteria and viruses, you’ll note that viruses are much more minute than bacteria. They are smaller in size, which means that they’re microscopic like bacteria. However, they are much smaller.

People generally use sanitizers on food contact surfaces because they contain less harsh chemicals than disinfectants. Always check the label to verify that the sanitizer you are using is food safe.

How does Sanitizing differ for Bacteria and Viruses?

The main difference between sanitizing for bacteria and viruses is the frequency and the materials. Ultimately, you cannot kill viruses on hard surfaces using a sanitizer. You need a disinfectant. Disinfectants are stronger chemicals than sanitizers. For bacteria, sanitizers might work. They don’t kill the bacteria, though. They reduce the number of bacteria on the surface.

If someone has a viral infection in your home, however, chances are by the time they start showing symptoms, you’ll get infected too. We can particularly see this phenomenon in the case of the COVID-19 pandemic. Families that had one member affected then found that they were quickly under duress too. Here, the approach was to couple sanitizer with disinfectants. With viruses, you also have to ensure, you’re constantly sanitizing everything that an infected person has touched. Viral infections are also easy to transfer as they travel easily in minute particles of dust and air. Containing a viral infection is tricky.

Bacteria and viruses are both disease-causing organisms. However, it’s necessary to note that bacteria can serve some utility sometimes. Bacteria help us digest the food in our gut. Viruses don’t work this way and are always harmful. They also don’t act outside themselves. They are disease-causing organisms that harm the host of the body they enter. Viral transmission is also different compared to bacterial transmission,  which is why the sanitization method for these microbes is also vastly different.

For more information on sanitization for viral and bacterial infections, visit us at www.911restorationbrevardcounty.com